A Picture of Contentment 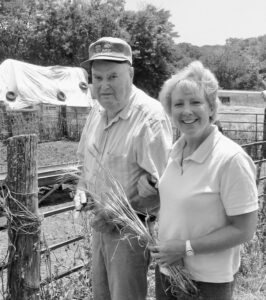 Some photos are truly a picture of contentment. This is one of them. Do you have a favorite photo that communicates contentment and tranquility?

I snapped this photo of my dad and my college buddy, Angie, in June 2005. The three of us were out poking around on Dad’s farmland about two miles east of my hometown. Dad in his beloved Phillip 66 cap is arm in arm with Angie who is holding a cluster of freshly picked wheat stocks. Dad, the ever-farmer relished showing us the wheat crop and the small herd of cattle my brothers were feeding out.

Little Did I Know

Little did I know when I took this photo on my fairly new Canon camera that it would be my last photo of Dad. He died six weeks later from his lengthy warfare with cancer.

When I downloaded my Nebraska trip photos to my computer that summer, I turned the color photo of Dad and Angie to black and white for fun, but somehow did not save the original color version first. Sigh. I wish I had that original color of version of this photo, but you know what? It doesn’t really matter because this picture is worth a thousand words. But mainly it’s a picture of contentment.

Father’s Day 2021 is just a few days away and looking at this photo makes me a bit misty but mainly grateful. My dad in this final weeks, in spite of his intense pain and restricted mobility, still knew how to live contented. He didn’t need fancy clothes or designer cologne to help him feel special (although he did own some nice suits and sport jackets and enjoyed a splash of Old Spice). Dad lived authentically and humbly and knew the true value of spending time with family and friends.

Particularly in his latter years, Dad modeled that contentment comes from within not from an accumulation of external props. Money and belongings did not bring ultimate joy to Dad. He knew these things could be wiped out in an instant. Instead, Dad sunk his rural roots deep in love, faith and cherished time with loved ones.

How about you? Where are you sinking your roots these days? Are you feeling more contented than contentious? More at peace than perturbed?

On my return trip to Colorado that June, I vividly remember driving across the northern Kansas flatlands and hearing Tim McGraw’s hit “Live Like You Were Dying” on the radio. I found myself on a lonely stretch of two-lane highway belting out the lyrics and bawling.

“How’s it hit ya, when you get that kind of news. Man what ya do. And he says, ‘I went sky divin’, I went rocky mountain climbin’. . . . And I loved deeper, and I spoke sweeter, and I gave forgiveness I’ve been denying,’ and he said ‘someday I hope you get the chance, to live like you were dyin’.”

Focused on the Right Now

Tim McGraw could no doubt could relate to the lyrics because his own father, Tug McGraw, had passed away from cancer months before the song was released in 2004. Perhaps Tug like my dad learned through illness the value of living each day as it comes with appreciation for those we love.

I know Dad learned to look for the little everyday things to savor, the unexpected joys that made him smile. Like heading out the farm and plucking up some wheat stocks. Or posing for pictures with a daughter still practicing on her new camera.

Especially in his final weeks alive, Dad chose not to focus on the someday, but focused on the right now. He lived with intentionality. He felt settled. He lived like he was dying.

Those values, my friend, make for a true picture of contentment.