Bending to the Point of Breaking? 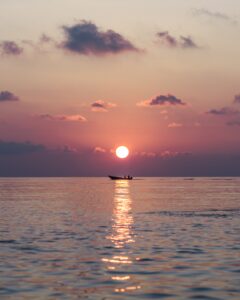 Every so often you meet or hear about a person who is beyond remarkable. Someone has endured bending to the point of breaking. Literally. One of these people is Dr. Vinh Chung. I am honored to share his story with you here. I know you’ll be encouraged by Dr. Chung’s never-give-up character.

In July 1979, three-year-old Vinh Chung and his family lay half-dead from dehydration in a bedraggled fishing boat jammed with 93 Vietnamese refugees. Would they all survive or just sink in the ocean depths without a trace?

Vinh was born eight months after the last of the Fall of Saigon in April 1975, and the Communist North seized control of the divided country. But to Vinh and the Chungs, descendants of Vietnam’s ethnic Chinese minority, this was only the beginning of their battle to stay alive.

Escape for Their Lives

Vinh’s father, Thanh, is the company’s chief operating officer, but the Communist proletariat confiscates the Chungs business and personal property. Even Grandma Chung’s hidden gold and diamonds and the family’s stacks of cash have no value under the new regime.

In February 1979, Vietnam goes to war with China and begins to eject ethnic Chinese from Vietnam. The Chungs know it is time to save their lives by escaping on a boat with their extended families, distant relatives and acquaintances.

The Chungs fund most of the old fishing boat that can hold all 290 passengers from 16 different families for their pre-typhoon season departure. Around this time, Hoa, Vinh’s mother, has a vivid dream of she and her husband and kids falling dead in the village market. A man in a white robe with long brown hair and matching beard approaches and points at each of them. Remarkably, they all come back to life.

None of Hoa’s friends help her identify this white-robed man in her dream. Some say he is Buddha; others believe he’s an ancestor. Hoa files away the dream as an unexplained mystery and begins secret preparations for the family’s exodus.

Once the passengers pay the appropriate fees and bribes to leave Vietnam, the boat casts off on the evening of June 12. With no seats or benches on the 70 x 13-foot fishing boat, everyone sits cross-legged on the upper and lower wooden decks. That is, everyone except for Grandma Chung who brought her wicker chair throne and sits beside the boat’s captain.

More than 300,000 South Vietnamese refugees have already overrun Southeast Asian countries, and most of these nations are not allowing more refugees. The passengers head south toward Malaysia, fewer than three hundred miles away.

Stranded on the Beach

On day two of the voyage in the world’s third-largest sea, pirates from Thailand accost the refugees, looting their gold, jewelry and other valuables. On the third day, the refugees land on an eastern Malaysian beach and purposely scuttle their boat so the uninviting locals will not send the exiles back to Vietnam.

For the next two weeks, the Malaysian military forces the nearly 300 refugees to march along the scorching beaches with only a few morsels of food provided by United Nations relief rations.

On day five of the ordeal, Hoa miscarries and is bleeding to death in the middle of a monsoon downpour. Vinh describes how his father cradles Hoa and holds a canvas tarp from the boat over her limp body to keep her warm and dry.

“We had the clothes on our backs, and we had each other,” Vinh says, “I believe that night was the beginning of my father’s transformation.”

The former rich, powerful COO was now realizing whatever he had left in the world—his wife and eight children—were the only things that had ever really mattered. The next morning, guards allow Hoa to be admitted to a local hospital. After nine days, she is released back to the beach, but cannot find her family.

Hoa stumbles upon a military barracks filled with Vietnamese refugees. One woman voices to Hoa, “Only Jesus can protect you now.” This woman speaks of Jesus as a loving, powerful protector. Hoa senses comfort and prays on her knees for God’s protection and deliverance.

The next morning, July 3, Hoa gleefully discovers her family and group members farther down the beach. Military guards divide the nearly 300 refugees into four weathered fishing boats. Hoa decides the family will sail with her parents and siblings’ families instead of the Chungs. Hoa’s decision proves a fateful choice.

A Malaysian patrol ship ties a large rope to each boat and tows the tiny vessels toward a promised island refugee camp. Instead, the Malaysians haul the boats farther out into the South China Sea—for 20 straight hours—then cut the boats loose. One of the Malaysian sailors shouts, “You’re not our problem. Go back where you came from!”

The already famished and weary refugees are abandoned without any food, water or fuel, in boats with no working engines or even an oar. By midnight, the boats drift out of view of each other.

On Vinh’s boat, he and the other 92 nomads press skin against skin, slow-cooking in July’s muggy heat. On the fourth day, Thai pirates attempt to drag and shatter apart the refugees’ boat. Incredibly, the pirates’ tow rope snaps and the trawler’s engine quits. The pirates have to retreat.

“To my father, that event was just one more indication that something or someone seemed to be guiding our family’s fate,” Vinh notes.

After five days, severe dehydration drains everyone. The adults drink seawater and the children drink the adult’s urine. Thanh senses something nudging his soul. He kneels in the middle of the boat and prays aloud to the Creator God to send rain. Within minutes, the heavens open in glorious moisture.

Dropping Past in the Sea

On the sixth day, a large white cargo ship suddenly appears. The Seasweep, a mercy ship sponsored by World Vision, a Christian relief ministry based in America, is sent out to rescue Vietnamese boat people. Discovered just in the nick of time, the refugees board the Seasweep and are delivered to nearby Singapore. They later learn the other three fishing boats drifted back to Vietnam.

The Seasweep crew hand Vietnamese-language magazines and Bibles to the refugees. Stan Mooneyham, the president of the relief agency, gives an impassioned message about Jesus’ heart of compassion for the unloved and helpless. Thanh is riveted. Through an expression the Chinese use to ask for forgiveness, “Let’s drop it in the ocean,” Thanh dumps his past into the sea and starts fresh with his Creator God.

Redeemer Lutheran Church in Fort Smith, Arkansas, adopts Thanh and his family almost five months after fleeing Vietnam. With only the clothes on their back and unable to speak a word of English, the Chungs painstakingly rebuild their lives.

The Chungs learn about other Vietnamese refugees attending a local Baptist church’s Vietnamese-translated worship service. The first time Hoa walks into the church lobby, she see a portrait of Jesus on the wall and exclaims, “That was the man in my dream.”

“She makes it very clear that the portrait of Jesus did not remind her of the man in her dream—He was the man,” Vinh writes in Where the Wind Leads, his book about his family’s miraculous rescue and redemption.

Thanh’s first U.S. job fabricating fiberglass earns him $2.90 an hour. Eventually working other jobs and saving as much as he can, Thanh with Hoa opens their Chungking Chinese Restaurant and employs the entire family, which has grown to eleven children.

Vinh wobbles his way through making friends and learning American culture. In time, he discovers a love for mathematics and football, and as a senior is awarded the Arkansas male scholar athlete of the year.

Despite wearing hand-me-down mismatched clothes to the Arkansas Governor’s School in summer of 1993, Vinh strikes up a friendship with Leisle Chung at the academic program. Leisle challenges Vinh to set his sights higher for an Ivy League education.

The two are falling in love as Leisle heads to Yale to pursue her ambition of being a Supreme Court judge and Vinh enrolls at Harvard to become a doctor. The couple marries in August 1988. Leisle completes her MBA at Harvard and graduates the same day Dr. Vinh Chung receives his Harvard medical degree. For that momentous celebration, Vinh removes his cap and gown and places them on his quite-proud papa.

Today, Dr. Vinh Chung and Leisle run a highly successful dermatology practice in Colorado and they are instilling in their four children to serve other vulnerable individuals around the globe.

Grandpa Thanh sacrificed again and again for his family to live in freedom with hard-earned opportunities. “Our success meant his failure; giving us a future meant giving up his own,” Vinh adds. “But in a sense, my father never really did give up his dream of being a doctor. He just passed the dream on to us.”

Today, the extended Chung family holds twenty-two university degrees. How they got here from there is one remarkable story of dreams coming true.

MORE TO THE STORY: Today, five of Vinh’s brothers are also in health-related fields. One is a family physician, two are optometrists, one an orthodontist and one a dentist. Their father, Thanh, had dreamed of becoming a doctor, but focused on acclimating to America and working hard so his children could advance.

Leisle’s Korean family story of starting a farm in 1980s Arkansas was portrayed in the movie Minari—the 2021 Academy Award Best Picture nominee. I highly, highly recommend this sweet film, which was written and directed by Leisle’s brother, Lee Isaac Chung.