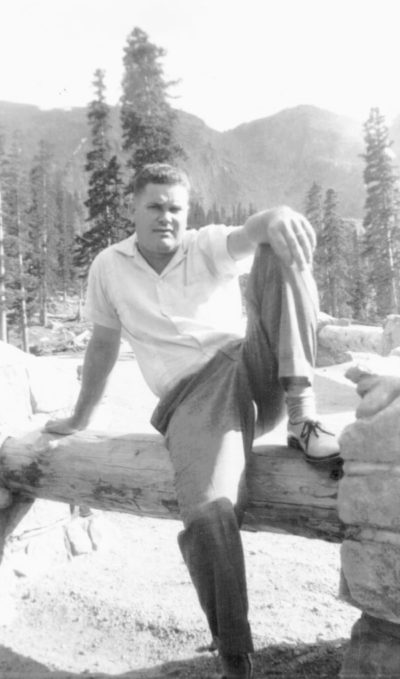 Face
Everything
And
Rise

Some of us are more naturally geared for the latter—to face everything and rise. I’d like to say that’s always me, but sometimes I’d rather throw reason to the wind and hightail it to easier circumstances. How about you? What’s your typical pattern of dealing with scary or tough situations? Forget or Face? Run or Rise?

I have this favorite photo of my dad sitting on my desk, and I have to say, he was a man who modeled Face Everything and Rise. Doesn’t Myron look so suave in his camp shirt, dungarees, and snazzy shoes? (Guess where this photo was taken? Mom wrote “Pikes Peak” on the back, which judging from the terrain it looks like Dad posed somewhere below America’s Mountain. I’m thrilled that my parents loved it here in Colorado too.)

Just a kid during the Great Depression, my dad learned to eat what was served him—often only bread with lard on it. Hearing radio reports about Pearl Harbor, Dad enlisted in the Merchant Marines a few weeks later. He braved the high seas to deliver weapons, food, and supplies to U.S. troops in the South Pacific. After the war, he stepped out into the service station business and never looked back for 50 years.

Tough times with crops and crop prices meant farmers couldn’t always pay their fuel bills regularly. Instead of running, Dad waited for payments. Instead of running, he buckled down with business sense. When doctors couldn’t figure out my mom’s health setbacks, Dad chose to rise. When terminal cancer threatened to take him down, he faced the fear and never complained about his diagnosis. When Mom died of effects of her cancer, Dad again stood up to the fear of managing life alone.

FEAR has two meanings. Forget or Face? Run or Rise? I hope you’ll join me on the facing and rising. The view is much better taking in a new dawn rising rather than seeing ourselves run for the hills.

“I learned that courage was not the absence of fear, but the triumph over it. The brave man is not he who does not feel afraid, but he who conquers that fear.” —Nelson Mandela

“Peace I leave with you; My peace I give to you; not as the world gives do I give to you. Do not let your heart be troubled, nor let it be fearful” (John 14:27). —Jesus