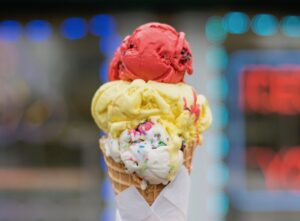 Good does triumph. I refuse to believe that evil actually wins when police officers and innocent civilians are killed in mass shootings. Veronica Moser-Sullivan and Eric Talley represented the good in our society.

When Veronica grew up, she wanted to be a police officer. Eric Talley left his comfortable IT job at age 40 to become a man in blue. I wonder today if they are savoring ice cream cones together in heaven.

You see, agitated gunmen killed both Veronica and Eric. On July 20, 2012, Veronica was murdered in the darkness of the Century 16 theater in Aurora, Colo. This past week on March 22, Eric Talley was the first policeman to rush into the King Scoopers grocery store just to the north in Boulder. Officer Eric courageously lost his life trying to save others.

After Veronica was gunned down in the ammo triade that killed 12 and injured 70 others, I visited the makeshift memorial near the Aurora theater. The immense pile of flowers, stuffed toys and notes of the grieving felt comforting. Near the sidewalk, I spotted a photo of Veronica wildly licking an ice cream waffle cone. In the image, the 6-year-old has her head slightly tilted back as if to catch any drip of her cool treat. Veronica’s bright eyes expressed an impish playfulness for the camera.

I also noticed a Colorado Rockies hat resting near Veronica’s head in her photo. A half-deflated Mylar® balloon inscribed with “fly with the angels. . .” blocked the view of Veronica’s ice cream. In front of the balloon, Mickey Mouse and a pink bear leaned shoulder to shoulder. Crumbly dead roses rested at their feet. 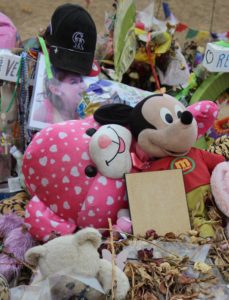 Not the Final Reality

How cruel. How sad. Cruel-sad enforcers feel as if they are slithering into every crevice of our country. Baton Rouge. Dallas. Orlando. New York City. Parkland. Las Vegas. San Bernardino. Dayton. Atlanta. Rogue assailants to mastermind factions are targeting the lifeblood of humanity—kindness, decency, trust, community.

But we must not cave to the unthinkable acts of those who hearts are blackened by paranoia, bitterness and revenge. Evil is a reality but not the final reality. There is and will be more to the story. Good does triumph.

Irish statesman Edmund Burke is known for his words that still resound through the ages: “The only thing necessary for the triumph of evil is for good men to do nothing.”

Nothing is cowering in fear when we don’t want to make waves. Staying silent when we encounter bullying is doing Nothing. Choosing apathy and absence on election day is Nothing. Nothing is bemoaning instead of believing we can make a difference.

Veronica’s seven-year-old second cousin Aubrey refused to “do nothing” after losing her buddy. Aubrey started a lemonade stand to raise money for an Aurora community memorial garden to honor those who lost their lives in the 2012 shooting. Good does triumph.

Even before kindergarten, Veronica wanted to be a police officer. In a special commissioning ceremony in September 2015, the ice cream-loving grade-schooler got her wish.“We wanted to give this little angel her own badge in hopes that her spirit will watch over the Aurora Police Department,” explained Aurora Police Chief Nick Metz.

After a drunk driver killed his friend, Officer Eric joined the Boulder police force in 2010. The devoted family man wanted to serve and protect the community he loved. A GoFundMe page for Officer Eric has already raised almost $900,000 for his family. Good does triumph.

A Pledge for All of Us

Painfully, these tragedies in America are crazed and senseless and horrifying—but good does triumph over evil. The unthinkable becomes a tribute to the fallen. Fear fades as our remarkable resolve teaches us to rise again and choose love over retaliation.

And as we do, more little girls like Veronica and noble men like Eric can dream and some day pledge these words on behalf of all of us:

On my honor,
I will never betray my badge,
my integrity, my character,
or the public trust.
I will always have
the courage to hold myself
and others accountable for our actions.
I will always uphold the constitution
my community and the agency I serve.

Bon appétit on that heavenly ice cream, Veronica and Eric. Good does triumph.