Impossible! It Can’t Be Done 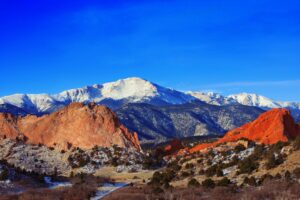 “Impossible! It can’t be done!” Those words draw more than a line in the sand. To some, “impossible” and “can’t be done” are fighting words. Words to say, “Oh, yeah? Dare me!” Or, as some boldly declare these days, “Here, hold my beer.”

No Human Being Could Have

As you may know, I live in Colorado Springs, which is famous for our gorgeous mountain, Pikes Peak. I’ve recently learned more of the backstory on this 14,115-foot Rocky Mountain beauty. It’s the kind of story that inspires us all to rethink the impossible.

Back in 1803, the United States acquired the Louisiana territory from France—some 828,000 square miles. The area included the states of Louisiana and Arkansas stretching as far north as North Dakota and Minnesota out west to Colorado, Wyoming and Montana.

President Thomas Jefferson appointed brigadier general and explorer Zebulon Pike to survey the land. Pike and his men journeyed to Colorado and in November 1806 laid eyes on the towering mountain in southeast Colorado. They were excited to climb the peak and use it as a vantage point to survey the surrounding land.

Unfortunately, the Pike Expedition was ill-prepared and ill-equipped to tackle the high-altitude mount. Unable to tackle the mountain, Pike wrote in his journal that he “believed no human being could have ascended to its pinnacle.”

Yet, 14 years later, Edwin James, a botanist, joined French explorer Bijou in ascending the mountain for the first time in recorded American history. On the maiden trip, James identified the state flower, the blue columbine.

Well, so much for the “impossible. It can’t be done.”

“But When I Saw the View”

Fast-forward to the summer of 1893 and poet and English teacher Katharine Lee Bates, who was teaching at Colorado College in Colorado Springs, Colorado. Later she remembered: “One day some of the other teachers and I decided to go on a trip to 14,000-foot Pikes Peak. We hired a prairie wagon. Near the top we had to leave the wagon and go the rest of the way on mules. I was very tired. But when I saw the view, I felt great joy. All the wonder of America seemed displayed there, with the sea-like expanse.”

On the pinnacle of the mountain a poem started to come to her, and she wrote the words down upon returning to her hotel room. The poem was first published with the name Pikes Peak in the Independence Day edition of the church periodical The Congregationalist in 1895. Bates received $5 for her iconic words we know today as America the Beautiful. Remember learning the words back in grade school?

O beautiful for spacious skies, for amber waves of grain
For purple mountain majesties, above the fruited plain
America, America, God shed His grace on thee
And crown thy good with brotherhood, from sea to shining sea

So from the explorer who declared “no human being could have ascended to its pinnacle” to the poet who ascended on a mule to the 400,000 hikers who now climb Pikes Peak every year, impossible is possible. It can’t be done is done. So thank you Edwin James, Mr. Bijou and Katherine Lee Bates. You did not let a 14,115 feet mountain stand in your way.

I always love a good naysayer vs. yaysayer challenge. What mountain are you facing right now in your life? Unlike Pike and his expedition team, are you prepared and equipped? Are you ready to dig deep and keep going? Ready to bend and bend until you reach your goal? I’m willing to bet your impossible is more possible than you think. I’m thinking your can’t will turn to a can

When it comes down to it, I’d much rather be known as a yaysayer than a naysayer. How about you?

P.S. The powers that be ended up naming America’s Mountain, Pikes Peak after Zebulon Pike even though he never ascended the mount. But as a writer, I still squirm wanting an apostrophe added to form Pike’s Peak. 🙂