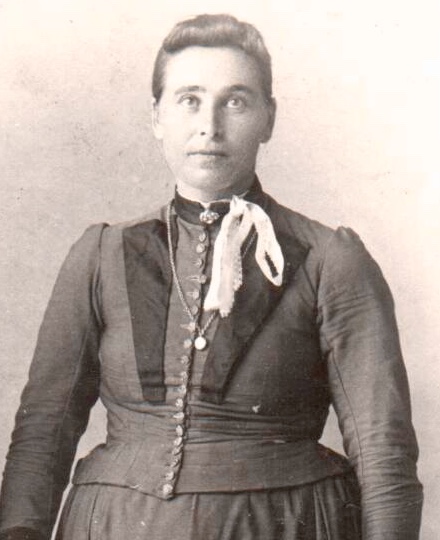 The new “Fearless Girl” statue on Wall Street has nothing on my great-grandmother Lueders (pictured here) who modeled perseverance. Ingenuity. Vision. Hope. As America reflects on Women’s History Month, it’s time to salute some pioneering females who with gutsy determination make all our lives easier today.

Your cell phone and those paper bags, windshield wipers, and no-iron clothes? You can thank a number of ingenious women for inventing them. These brilliant female inventors prove that each of us can dream BIG and shape the world right around us. (And hey, my great-grandmother is not famous for a popular invention, but she did help invent my grandfather, who helped invent my father, who helped invent me. 🙂

Mary Anderson (1866-1953) In 1903, Alabama-born Mary Anderson received a patent on her car window cleaning device—a swinging arm with a rubber blade connected to a lever inside a streetcar or automobile that a driver could manually operate. By 1917, another women inventor Charlotte Bridgwood patented her automatic wiper blade. Neither woman made money from her invention.

Bette Nesmith Graham (1924-1980) A single mother and bank secretary, Bette Nesmith Graham struggled with correcting typing errors on the office electric typewriter. She relied on her artist training to mix a white tempera paint for a typo cover-up that she later patented as Liquid Paper.®

Ruth Handler (1916-2002) The creator of the famed Barbie® doll is also the co-founder of Mattel, Inc., the leading toy company that has produced billions of the three-dimensional dolls since its debut at the 1959 Toy Fair. A breast cancer survivor, Handler also founded the Nearly Me company that that produces realistic-looking breast protheses and post-mastectomy swimwear.

Mary Phelps Jacob (1891-1970) was an educated socialite living in New York City who decided to do away with the ill-fitting women’s corsets of her day. She fashioned her first “backless brassiere” out of two silk handkerchiefs, pink ribbon, and cord. Jacob’s 1914 patent on her revolutionary undergarment flourished into the Fashion Form Brassière Company that she later sold to Warner Brothers Corset Company.

Margaret Knight (1838-1914) Once described as a “woman Edison,” inventor Margaret Knight received more than 20 patents on her almost 100 innovations, including a rotary engine and shoe-cutting machine. Her most famous creation? Designing a machine to create flat-bottom paper bags.

Hedy Lamarr (1914-2000) Known more as a beauty icon and film actress, Hedy Lamarr’s credits also roll with co-inventing a secret communications system to thwart the Nazis in World War II. Along with composer George Anthiel, Lamarr developed an unbreakable code for radio transmission and reception. Their technology formed the foundation for today’s digital communications, including cell phones and fax machines.

Patsy Sherman (1930-2008) developed Scotchgard® with her 3M research partner in 1956. Need to protect your furniture, carpet, and car upholstery from stains and spills? Give a shout out to Patsy and the countless female innovators who continue to add convenience and comfort to our daily lives

Perseverance. Ingenuity. Vision. Hope. What’s holding you back from pressing on with your own dreams and bending when new challenges arise? Go, YOU!