Teeing Up for Your Comeback? 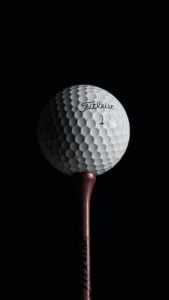 I love when people make an incredible comeback. I honestly applaud comebacks of all sorts from regaining health after injury and disease to refusing to quit when the odds look impossible. Merriam-Webster defines comeback as “a return to a former position or condition.”

Let me tell you about two comebacks I have witnessed this week alone. These stories are a bit opposite on the spectrum of resiliency, but there’s encouragement and kick-butt strength in their stories for you and me.

No Longer a Top Contender?

Last Saturday turned into a gloomy, rainy afternoon here, so I decided to putz around the house and watch a little television. I was wonderfully surprised to catch golf legend Phil Mickelson leading in the PGA Championship.

The announcers were buzzing about what ifs in seeing almost 51-year-old Phil make a comeback in his beloved sport. But no one in the world as old as Lefty has ever won a major golf tournament. Julius Boros won the 1968 PGA Championship at age 48. But 50+ years old? Nope. No one.

Philip Adolph Mickelson has seen his share of wins and near-wins over his three decades as a professional golfer, but many counted him out as a top contender long ago. A San Diego native, Phil grew up golfing with his father and grandfather and adopted his famous left-handed swing by mirroring his father on the fairway. (Phil is actually right-handed).

The four-time All-American at Arizona State University met his wife, Amy, in Tucson where she was a dance squad performer for the Phoenix Suns. In 2009, Amy, was diagnosed with breast cancer. During Amy’s grueling treatment and recovery, Phil stepped away from the PGA Tour to be with her and their three children.

Phil has faced his own share of health setbacks. He has psoriasis and psoriatic arthritis and revamped his diet and training to lose weight and regain strength and mobility. Phil understands the hard work of making a comeback. Phil understands bending when life dares you to break.

Instead of Feeling Defeated

About two weeks ago, Phil shared this perspective about his resiliency. “I’ve failed many times in my life and career and because of this I’ve learned a lot,” Lefty wrote. “Instead of feeling defeated countless times, I’ve used it as fuel to drive me to work harder. So today, join me in accepting our failures. Let’s use them to motivate us to work even harder.”

Work harder he did. Leading up to this past weekend, Phil was ranked 115th in the world. He hadn’t won a major tournament since 2013. That’s hundreds of fairways and greens to play and come up short.

But on Sunday afternoon May 23, 2021, Phil proved he still has the physicality and finesse to beat out dozens of other pro players in their 20s, 30s and 40s. Pure chaos erupted at the 18th hole when Phil hit his way to victory. A scaled down version of chaos erupted in my living room as I shouted and did a fist pump congratulating Phil. My collie came running at my screech in Phil’s honor.

You see, I love a well-earned comeback. I’m thinking you do too. If you’re like me, you’d like a comeback or a reinvent in our own life this year. Or, to use golfing terms, a mulligan, so you can start over. If so, do not let age hold you back. Phil is living proof that “instead of feeling defeated countless times,” you can use challenges and tough obstacles to fuel new victories.

This week’s other comeback is growing in front of my house. Since last fall, my 7-foot burning bush plant has looked rather puny. Its thick branches are dry and lifeless while the rest of the yard looks lush with spring greenery. Not this trusty ole burning bush that come fall is ablaze with rich reds.

Did the bush finally die over winter? Did I prune it too much last year and hasten its demise? Hmmm . . . how long do you wait for a normally healthy plant to revive? This baby takes up sizeable space near my front steps, so everyone can see that it’s on it’s way out. Or… is it? 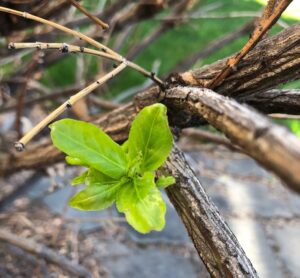 Over the weekend while Phil was working his golfing magic, the burning bush was making its own work-harder-and-smarter comeback. Maybe the extra rain and cooler weather were the invitation the burning bush needed to finally sprout some green leaves. There is life in them thar branches! The bush will rise again!

Most of the hefty bush still looks brown and brittle, but I have every confidence that the plant will make a glorious comeback. How about you and me? After a long year of COVID Crud and other challenges, are we in need of a comeback from the brown and brittle in our life?

I love when people and plants tee up to make an incredible comeback. So when you make your next comeback—of any size and significance—I’ll be right here with a bit of chaos erupting, fist pumping and screeching that sends my collies a running. You’re worth it.