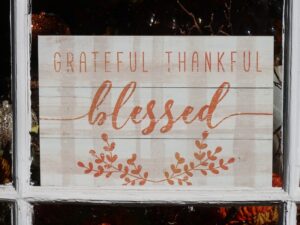 Grateful or grouchy. We have a choice every day of the year—and not just at Thanksgiving—to be grateful or grouchy. The other day on a hospital pet therapy visit with my collie, Maisie, I met with a patient who was beyond grouchy. Granted, being in pain and confined in a hospital room for weeks upon weeks can make one cantankerous, but this guy was off the charts for being ungrateful and surly. I have met with hundreds of other patients in worse condition who are grateful to be alive and on the mend.

With this irritable man, I sooooo wanted to end our conversation (er, well his long diatribe) and flee the entire hospital floor. But I sensed I needed to just stand and listen. Listen I did. The aging fellow had it out for anyone who celebrates Thanksgiving. He immediately asked me, “Why do you celebrate Thanksgiving?” “Because I have so many things that I’m thankful for in my life,” I quickly replied.

Picking on the Pilgrims

Nope. That was an unacceptable answer to this pushing-80 man who berated the pilgrims, pumpkin pie and plump poultry. He pointed out that the first Thanksgiving led to the slaughter of thousands of Native Americans and he could not celebrate this kind of national history.

To add to his grumbling, the faultfinder was originally from the East Coast and says he hates living in Colorado Springs. (Living here was his ex-wife’s fault.) On and on he went with an occasional “sorry if I’m preaching” pause. Sorry? Hmm. I didn’t get that he was apologetic at all.

Sigh. Some people are bitter and find relief in belittling and bashing and blaming. I truly felt pity for this grouchy guy who kept ranting on the very concept of celebrating Thanksgiving.

On the other hand, in the early 90s I visited a New York City hospital’s AIDS wing. I met patient after patient, humble and grateful people, even though their time on this earth was closing out. One of my greatest honors in life was when I was asked to sit next to two AIDS patients and pray with them. Here I was a fair-skinned journalist holding hands with a failing Hispanic and Black man—one on my right and one on my left.

These ill men were not belittling, bashing or blaming. They were simply bowing their heads and hearts in humility and gratitude. They expressed appreciation for the life they had already lived and the one they hoped to still cherish.

A quote from author Sam Lefkowitz sums up the difference between the grouchy and the grateful. “In case you ask me whether my cup is half-empty or half-full, I like to assert that I am thankful to have a cup.”

English writer and philosopher Gilbert K. Chesterton adds another meaningful perspective. “With regards to life,” he said, “the most important thing is whether you take things with gratitude or take them for granted.”

This Thanksgiving as we gather with family and friends, let’s put aside the things that make us grouchy and focus on gratitude. Let’s not take each other or any of our blessings for granted. I for one am thankful that I have a cup…and a plate…and a fork.

P.S. I am beyond GRATEFUL for you and your part in our online community.