We All Could Use an Angel 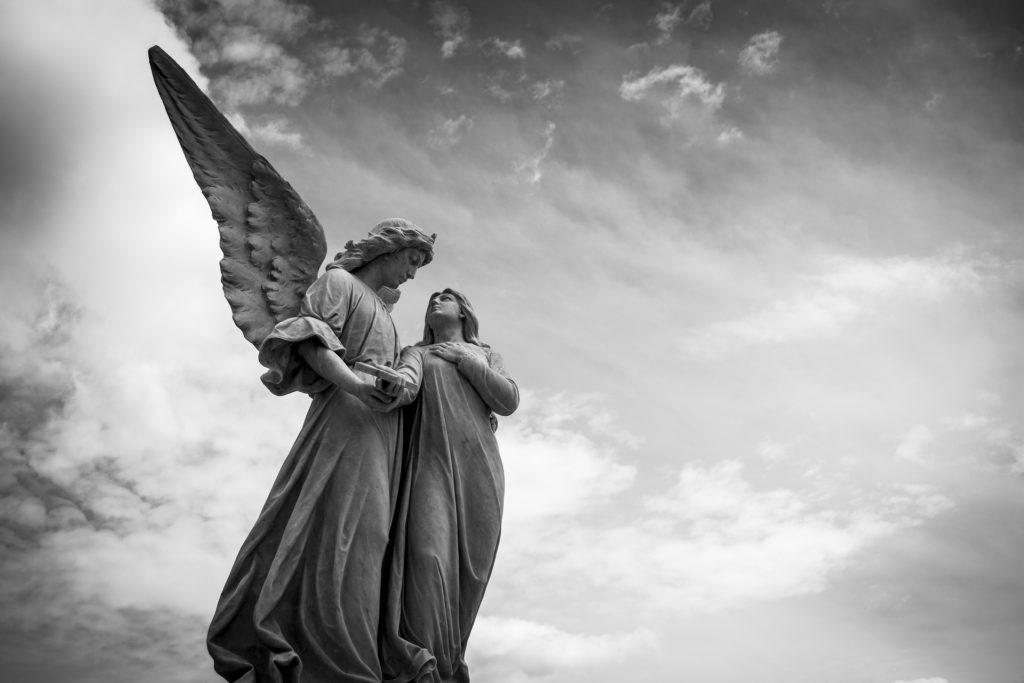 Do any of us really expect an angel to show up at our doorstep? Really? I don’t. But now I’m not so sure. A few weeks ago, when my doorbell rang about 10:30 a.m., I trotted upstairs from my office to look through the peephole. A blondish-gray haired woman was pacing at the bottom on my steps, looking to and fro into my front yard. Her mini SUV was running in my driveway with the driver’s door wide open. It’s kind of amazing the things you can spot through that little ½-inch round glass in your door.
I paused. I looked again and swear the gal looked like a former co-worker, so I cautiously opened the door. “Hi, I was driving past your house and spotted this injured black cat in your yard,” the stranger quickly blurted. “Is he yours? Is he your neighbor’s?”
I don’t own a cat, but I ventured into the yard and saw the neighborhood stray limping terribly. “I think someone ran him over and he’s not walking at all on his left legs,” the woman continued. “I’m a physician’s assistant and I live in Rochester, N.Y., and I’m here visiting my daughter in the area.” The take-charge woman tried coaxing the hurting feline to come to her. I started racking my brain of the neighbors who I think have been feeding old Blackie.

Dropping Everything for Kitty

I ran to one neighbors and rang their bell. Nothing. I then skipped two houses down across the street and found Kindra, a mid-30s mom at home.
Kindra said they have been feeding the longhaired cat and letting him sleep in their garage. Her three teens have named him “Kitty.” For the next several minutes, Kindra and I called, “Here, Kitty, here, Kitty” and followed the appendage-dragging cat toward another neighbors. Kitty slipped through the pickets and hobbled into some weeds.
Kindra and I exchanged cell phone numbers, and she promised to text me if/when Kitty showed up. Kindra was leaving out his favorite food. We turned and the woman who alerted us to Kitty’s pain disappeared. I swear the animal lover was right there and she vanished. No goodbye. No thanks for helping the cat. Just poof.
Or, maybe we were so focused on helping Kitty that we didn’t notice. Cue up the sci-fi or creep thriller music. The good news is Kitty did hop his way home and Kindra took him to the vet. Instead of a broken paw or two, he had an abscess probably from a tussle with another cat in the ‘hood. He’s healing well and getting his mobility back, and I now know my neighbor’s name and we chitchat more readily.

Stranded on the Train Tracks

But what about that stranger at my door? Was she an angel in disguise? Hmmmm . . . the day before, another Colorado Springs resident ran into a similar mystery messenger. This time a woman on a southside street flagged down driver Brad Doll. She tried to stop other drivers, but they passed by. New to town, Brad did not know if he was safe in that neighborhood at 10 p.m., but he stopped anyway.
The unidentified woman led Brad to a red sedan lodged on train tracks. The female occupant, Helga Rodgers, appeared dazed and refused to get out of the vehicle. And yes, as you may have guessed, a train was approaching. Brad wedged inside the vehicle and moved the woman to the backseat of his car.
He then drove his car farther away from the tracks and Ka-bam! The train smashed the red sedan. Brad credits the woman who stopped him for saving Helga’s life. “She was fiercely protective of Helga and told me clearly what I needed to do,” Brad says. But instantly after the crash, the kind woman disappeared, as the paper described “like an angel portrayed by Hollywood.”
Recovered from her near-death experience, Helga told a local TV station, “Thank you very much, wherever you come from. God bless you. . . . You saved my life.” And the city’s main newspaper is heralding the woman who flagged down Brad “the anonymous Samaritan” based on the Bible’s account of the Good Samaritan.

Swallowed by a Sinkhole

Now this week, another Colorado woman is telling her own story of being saved by a “guardian angel”—this time a mystery male. On Tuesday night in a Denver suburb, Ashley Marisch’s vehicle careened into a sinkhole. Just before her car was swallowed whole, a man approached and directed her to flee the teetering car immediately. Seconds later, the Toyota RAV4 dropped more than 10 feet into the mucky road pit. Police say Ashley is lucky to be alive.
“. . . I feel blessed and am thankful I had a guardian angel there to help me get out of the car,” Marisch said. “I hope he knows how grateful I am that he was there to help me.” A news report of the miracle rescue notes, “Neither Marisch nor police have so far been able to figure out who the man is who helped her out of her vehicle.”
In our dizzying world, we could all use an angel. Rescued kitties and spared drivers. Were these mystery angels or anonymous Good Samaritans? Or, maybe some of both? Either way, I’d hope any of us welcome them back any time.

My Questions for Angels
Why do you look like ordinary humans?
Do you really have wings in heaven?
Is Clarence up there with his bell?
Do you bruise or get injured when you save people from harm?
Do you get reassigned to different people? How often?
Do all angels know how to play a harp?
Do angels all angels sing well?
Do you ever get tired of wearing white?

What would YOU ask an angel?